This navy 5 panel hat is made from cozy tweed wool fabric with a white Kirrin Finch front label. It's one size fits all with an adjustable strap at the back. Best worn around a campfire, or hitting up a local brewery!

My son became 29, last December the seventh.
Your cap was all he wanted to get.
He suffers from Cystic Fibrosis, so it is great that he reached his 29-th birthday.
I was very pleased that he found a gift he apriciates.
I saw the cap on your website and I liked it.
I ordered it about ten days before his birthday and it arrived, I think, the ninth of December.
I will give it the 26-th of December when he visits me with his girlfriend.
His twin sister will also be there.
The cap he wears on the photograph is not yours, but he looks great with a cap. 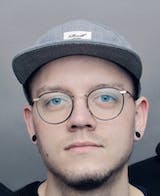 I get compliments every time I wear it!

J
J.
I love this hat and this company

Amazing quality and customer service. I had a little issue with my address (totally my fault) and the good people at Kirrin Finch were super helpful. Ended up receiving the hat and it’s clearly great quality and looks really good. Keep up the great work!

Great hat! It was exactly what I wanted. The material feels great. It’s a quality build.